A little over a month ago, I drove out to Nashville, Tennessee to cover the Summer NAMM show for DRUM! Magazine. While there, I was lucky enough to catch the tenth anniversary celebration of the World’s Fastest Drummer Organization. Here’s a little report I put together about the event. 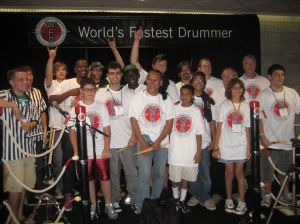 As if the sweltering summer heat and abundance of brand new gear wasn’t enough to send show-going drummers into shock, World’s Fastest Drummer brought the house down, treating attendees to a blazing competition that helped ring in their 10th anniversary with a bang.

Learn a little more about Matt and see some of his performance videos here.

Attracting twenty-one of the world’s speediest stick slingers, the organization enticed enlisted drummers with the promise of a killer prize package awarded to the winner of each category (fastest feet and fastest hands). Included in the winnings: a Pearl Masters drum set, a selection of Sabian cymbals, an Axis double pedal, 100 Remo drumheads and 72 pairs of Pro-Mark drumsticks bearing the victor’s signature. With a grand prize like that, it’s no wonder the competition attracted such a wealth of talent.

Before the final round began however, viewers were treated to a head turning performance by Mr. Clifford Marshall Van Buren, the man who once held the record for most consecutive hours drumming (720 – that’s 30 days); Van Buren set the record for most single strokes played upside down in a ten minute period…which was rad. He hit 6,300. Here’s a clip

And here’s a brief interview with the man himself. Guys who do stuff like this deserve bottles of water. I was happy to help (see clip). Keep an eye out for his solo CD’s and a book he’s co-authoring about the consecutive drumming records with Boo McAfee. Keep up with Clifford here.

After the Van Buren affair, the eager audience saw an exhilarating and all-to-brief performance from drummer/co-M.C. Derek Phillips and bassist Alana Rocklin (who introduced herself as Alotta Rockin’). Unfortunately absent from the following clip is a dude who later yelled “Go bass lady.” Hats off.

The Phillips/Rocklin duo finished with a bumping, funky tune, and then turned the floor over to WFD. Cohosted by Phillips and Matt Smith, the competition kicked off with the Fastest Feet finalists. Ten gifted pedalers flew through their allotted sixty seconds, but only one contestant brought home the gold. With a whopping 860 strokes, Kevin Bernardy stole the show with this blistering performance

After only a brief break, the Fastest Hands finals were in full swing. While every contender put up impressive numbers, it was Australian stick-smith Joseph Moujalli who nabbed first place honors. A little shy of his 1040 stroke personal best, but still more than a hundred strokes ahead of the runner-up, Moujalli easily bagged the belt with this 995 stroke run

After watching the WFD competition, the longevity of the organization comes as no surprise. This was a thrilling event that never allowed competition to overshadow the positive atmosphere. Here’s to another ten years. 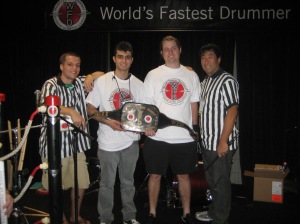 One thought on “Here’s to Ten Years”