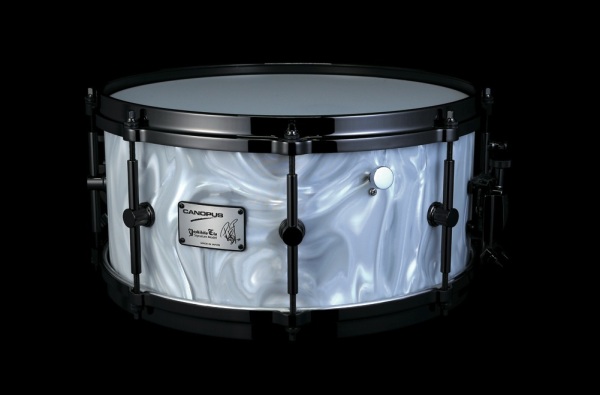 Canopus is one of those incredible companies that makes consistently outstanding products, but is criminally overlooked (at least here in the States – I’m not sure about how they are regarded internationally) by most players. I’m not sure if that’s an issue of perception or availability, but it’s bizarre. I think most drummers who are familiar with the brand know that they make beautiful instruments, but they just haven’t achieved the same foothold in the U.S. market as other comparable builders. It’s baffling to me. If I’m wrong about all of this, please let me know in the comments – show your Canopus pride, please!

It’s kind of lame to start a review by saying that a company doesn’t get the respect they deserve, but I couldn’t help but think about that after spending a month with the Yoshihito Eto signature snare. This is another one of those sleeping giant snares that would likely capture the attention of any drummer, but simply isn’t getting enough time in front of interested ears. This is a wonderful drum.

I wasn’t familiar with Yoshihito Eto’s playing prior to checking out this drum. If you aren’t either, here’s a little primer (for English speakers: no translation in video, but the playing is well worth a view):

So, that surprised me.

I was surprised because I went into this review blind, having not read anything about the drum in advance. I wanted to simply get it up on the stand and come to my own conclusions without the benefit of marketing copy or manufacturer info.

The drum is fairly striking right out of the box with its White Satin Flame wrap and all-Black Nickel-plated hardware (all components except the tone control knob and snare wires have a great, rich black chrome look). The wrap is slightly textured in a way that reminds me of those old cups from Burger King that had moving images of Schwarzenegger from Last Action Hero or whatever on them (I’m fat, so, food jokes). I don’t recall another wrapped drum feeling like this one, and I’m not sure how much I love it. Truthfully, it feels a little plastic-y, and as such, a bit cheap. It’s obviously not cheap as this is an expertly crafted instrument, but it still feels a little strange.

Balanced by the Black Nickel-plated hardware and a black oil finished interior, the Eto snare’s wrap makes it look like a vintage drum in modern clothes. The diminutive, single-point lugs add a touch of flash, but leave plenty of room for the highly reactive flame finish to catch and spray different colors. The drum really popped under stage lights.

Anyway, it wasn’t the snare’s looks that surprised me. It was the sound. The Eto had come to my house straight from the Chicago Drum Show, and was still sporting it’s slightly-higher-than-medium tension (essentially for cutting through trade show noise). After a couple of quick hits, I felt confident I was playing an all-Birch drum. It had all the cutting attack and sweet highs of Birch, and was balanced by a very focused bottom end. I assumed the shell’s deeper core note was the result of its depth and ply structure rather than anything else. It was full and complex; warm, but not overly so.

And that seemed to be the case through most of its tuning range. Some interesting warm notes popped up at lower tunings which I found very interesting. But on the whole, this struck me as a sensational pop and modern rock snare drum. It cuts. It’s rich and dynamic, but really seems to love high volume play. It’s got an ultra-clean, dialed-in sound that feels perfect for recording compression.

So, that’s why I was very surprised to see that Eto is, among other things, a burning jazz player with a style that’s just a little wild. I normally associate that kind of approach with drums that have a higher fundamental and more exploratory overtones (of which this drum had very few). That’s certainly not an essential sound for that style, but it’s what my overly-reductive brain expects.

After learning more about Yoshihito Eto, I felt like I should look at the drum with renewed expectations. I read up on the shell construction and learned about the split Maple and Birch shell layout, which explained some of that extra depth I noticed. I also found this in the company’s literature:

“In order to suit the eclectic playing style of drummer, Yoshihito Eto, his signature snare drum needed the capacity to shine in a wide variety of musical situations – from Jazz to Pop and Hard rock. It needed to be a true “all-rounder”, but at the same time it needed to reflect Eto’s playing personality. This was a major challenge – because it is often observed that an “all-rounder” snare drum seems to lose a certain individual character in order to function in all musical situations. Canopus produced many prototypes of this model – in search of the perfect combination of sensitivity, power, “clean” tone, and “complex” sound. We have met the challenge and realised this ideal sound.”

Well, with that information in mind, I think Canopus and Eto absolutely achieved their ambition here. The die-cast hoops keep the drum focused without choking or restricting the sound, while those minimal lugs allow for plenty of shell vibration. The included Non-plated Vintage wires combine with medium-depth and somewhat wide snare beds to offer a crisp, dry response that doesn’t wash out even when fairly loose. The snare is supremely sensitive yet controlled at all volumes. Even the sharp inside bearing edge cut is countered by a very short, slightly rounded exterior cut to better manage edge tones.

Wire tension toggles on both the throw and butt make it easy to find a perfect wire balance for whatever sound you’re after. I’m not totally in love with the throw and butt units themselves as they look a little utilitarian, but they are each smooth, effective, and quiet.

And the internal muffler really helps fit different situations with ease. Although, I will say that if the Tone Control pad is only partially engaged – barely touching the batter head – the mechanism can rattle just a bit. To me that limits the drum’s versatility, but only a little. This is still a tremendously capable instrument that can sound comfortable in almost any style.

Signature instruments are normally designed to capture the specific sound of a specific player, and can as a result sometimes feel limited. That is not the case with the Canopus Yoshihito Eto snare drum at all. This is a balanced, clean, immensely versatile set piece that could easily replace half the snare drums I own. This drum isn’t loaded with built-in personality, but it won’t have any problem reproducing your personality.