This piece is really corny, but it helped open a few doors for me earlier this year and I wanted to share it. 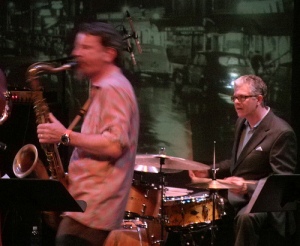 Three nights ago, I was sitting in Dizzy’s Club Coca-Cola, watching a sublime performance by the Denny Zeitlin Trio – the closing set of their week-long stay at the famed LincolnCentervenue. Watching Zeitlin’s trio navigate a dark, complex tune called “Signs and Wonders,” one of the few originals they played all evening, it’s clear the band is really working despite their unerring smiles.

The room is filled with smartly dressed listeners enrapt by the trio’s kinetic performance. Every set of eyes in the dimly lit, clean room are fixed entirely on the musicians, ignoring the stunning central Park view available through the broad windows behind the stage. The musicians, and Wilson in particular, have the entire room in the palm of their hand, yet it’s abundantly clear that this concert would be virtually no different were the room empty. These men are playing and exploring music for music’s sake. Nothing more.

Tonight, I’m in a room vastly different from Club Coca-Cola. I’m in a bar on college row in myFloridahometown. The bar is roughly double the width of a hallway (I’m being generous), but still finds room for a stage. The room is dark, damp and thick with the pungent rank of stale booze. I’ve played this room nearly a hundred times and it’s rarely a wonderful experience.

My drums are set up similarly to Mr. Wilson’s. They are roughly the same size, and speak with many of the same voices. I’m also supporting a piano trio, but the music is as different from Zeitlin’s group as is this room from Dizzy’s. The group is slogging through a stuttering version of a recent top 40 cover, the title of which I can’t remember. I’m striking the edge of the edge of a large cymbal with the shoulder of my stick in an effort to fill up some of the space occupied by other musicians in the songs original recording. The shuttering, flapping edge of the cymbal is splashing colored light around the room, spilling bits of blue, purple and red on the few faces staring back at us. There is a woman standing by the side of the stage, nearly close enough for me to reach out and touch, looking down, whirling her drink and staring at the glass.

The tune ends and we move on to the last two songs of the evening. Irritated with my inability to hear the other players, I turn and look at the monitor speaker as if seeing the pulsating paper cone might jumpstart my ears again. In turning my body I feel the center post of my seat sway more than it should. There must be a bolt loose. I spend my final minutes on the bandstand trying to find a way to hover over the seat without losing the pocket.

The set ends to mild applause, and within seconds, I set to work thumbing the stiff bolts on my hardware. Folding the chromed machines into their least obstructive position, I notice a new crop of rusted pitting along the low post of a cymbal stand, and pause for just a second. This stuff works hard and it’s extremely reliable, but it’s getting worn out.

Irritated and thinking about the performance at Dizzy’s only a few nights prior, I grab my pay and head out the door, eager to shake off the evening.

Inspiration is dangerous. While watching or listening to your favorite musicians can push you to play your best, it can just as easily remind you of those unmet expectations that may pervade your current situation. If you’re already playing to an unresponsive audience, dwelling on the memory of a room full of adulatory fans cheering on your heroes might be more hindrance than help.

Rather than wrestling with the weight of career comparison, try to think about what made those players you admire so successful. Guys like Matt Wilson didn’t earn the respect of the international elite by sweating a slim crowd. They showed up every night, invested themselves in the performance, and played music. The players that made you want to pick up sticks in the first place did so by being there every single night – good or bad.

Really being there doesn’t mean playing to win over every head in the room. It simply means approaching every set with the same kind of celebration and joy you felt the very first time you performed. That kind of energy is undeniably infectious, and it’s one of the key ingredients of a successful career. Your audience is much more likely to have fun if they’re watching you have fun.

If you’re having trouble seeing the silver lining of another bad situation, take a look at the following tips to help you better get into the groove.

Think about what you want out of each gig. If, deep down, you want to feel like this gig is a waste of your time because the crowd is a little too thin, then go ahead and be bummed like you’ve never been bummed before. However, if you’re up there playing music because love it, and you want to keep loving it, don’t let a few unsold tickets stop you. Playing music is fun (it’s been said a thousand times: that’s why they call it ‘playing’), so treat bad gigs like you would a jam in your basement; enjoy the music and have fun.

Focus on the positives. Fairly obvious and easier said than done, sure, but really relishing the pros of any situation will help improve your state of mind. If you’re only playing to two guests and a bartender, but they’re clapping after each tune, make the most of entertaining them rather than wondering where their friends are.

Remember why you’re here. You probably didn’t start performing music because it makes you miserable, so sit back and enjoy the fact that you’ve been given the chance to share something you love with other people. Not everyone has the means or opportunity to express themselves creatively, but you do. Enjoy it.

This shouldn’t need to be said, but if the gig is putting cash in your pocket, earn it. In most lines of work, those who take no interest in their job and only show up to collect a paycheck rarely go on to have successful careers in that field. Take pride in the work you’re doing, and use that energy to better inspire your performance.

So next time you’re grueling through a set in front of too many empty seats, dreaming of greener pastures, remember, your favorite players didn’t climb the ranks of drumming nobility by being someplace else. They did it by savoring their time on the bandstand and loving what they do.