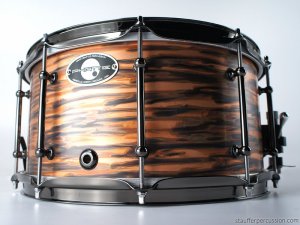 I live in an area with an uncommon affinity for high-quality, local craftsmanship. Asheville, NC hosts an ever-growing community of extremely talented artists and specialists that produce beautiful work day in and day out. Even so, it still surprised me to find out that this little mountain town is also home to one of the country’s most respected custom drum companies – Phattie Drums.

The founding brand of what eventually became Stauffer Percussion, Phattie Drums specializes in stylish tubs with a big, round, and of course, phat sound. The snare I received for review was certainly no exception. With its stunning etched copper veneer and sleek black chrome lugs and hoops, it was more than easy on the eyes.

Phattie’s new series of copper-veneered drums feature a unique design that really sets them apart from other snares with fancy finishes. Instead of a paint job or layer of adhesive-backed laminate, the Acid Etched snares are actually wrapped in sheet of extra-thin copper. The metal is affixed to the shell essentially as an outer ply, which I can only imagine adds an extra hint of clarity to the drum’s attack, while also creating a really extraordinary look. Learn more.

Fortunately, the Phattie snare’s beauty went way beyond skin deep. With the included Evans HD head, the drum had serious pop and plenty of body to back it up. The HD heads really cut out a lot of overtones, making the drum microphone ready right away. With a medium-high tuning, the Acid Etched snare could easily fit in to almost any recording situation – which is probably why similar Phattie’s are in heavy rotation at Echo Mountain, Sound Temple and Sioux Sioux Studios.

While I thoroughly enjoyed it right out of the box, the drum really blew me away when cranked up high. Tuned just shy of tabletop tight with Remo Coated Ambassador batter side head, the Phattie snare had a crisp, cutting attack followed by a big, throaty note. With the sensitivity of a much shallower drum and the meaty presence expected of its size, the drum was a rare treat to play, and would certainly be a first call instrument for any player. Somehow simultaneously sharp and round, the copper-covered snare sounded great in every context.

I think a great deal of that dynamic playability should be attributed to Phattie’s unique bearing edges. Rather than try to restate what Mr. Stauffer told me about the edges, I’ll let his website do the talking;

“…our bearing edge doesn’t come to a sharp edge, but is leveled to a thickness of 1/4th the total shell thickness. The flatness is then checked on a granite plate with a tolerance of .0014″, ensuring the flattest edge possible.”

That extra contact with the head must have a big impact on the sound and tuning of everything that comes out of the Phattie shop, because I can’t ever recall playing a drum that covered such a wide sonic spectrum at every tuning. Pretty incredible.

One final note about the drum’s sound; it came as no surprise that it was plenty capable of achieving that big, soft wallop common to a lot of modern country recordings, but I’d feel terrible if I didn’t at least mention how well it handled those lower tunings. Huge, warm and round, the snare was incredibly satisfying with loose heads and a little gel muffling.

With top-of-the-line hardware, a knockout finish and an unbelievable sound, the Phattie Distressed Acid Etched snare proved to be a wholly incredible instrument. Rather than continue to pile on the adjectives, I’ll finish with this: I can say, without question, that the next time I’m in the market for a snare drum, this one will be at the top of the list.

Unfortunately, these clips didn’t adequately capture the tonal difference between tunings, but I hope they can still offer some insight into what the drum is capable of doing.

Thanks for reading. If you’ve got a minute, check the interview I conducted with Phattie proprietor, Dennis Stauffer a few months back.