Earlier this year, at the Nashville Drum Show, Not So Modern Drummer hosted 35 contestants for the return of the Snare Drum Olympics. Throughout the show, attendees could check out each and every single one of the snare drums, compare them against the competition and vote for their favorites.

I really enjoyed going through each of the drums, as I don’t often get a chance to check out SUCH high end snares. Lots of really stunning entries, but there were definitely a few standouts. Unfortunately, I lost my notes from the show, but I remember most of my observations, so I’m going to try and tack on a little something for each photo.

NSMD should announce the winner within the next week, so check back soon to see who took home the gold!

Solid shell from Antonio Drums. I remember this drum was surprising fat and had a cozy ring to the end of each note. Nice. 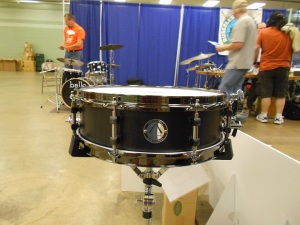 Knockout aluminum shell with wood hoops from the recently relaunch Ayotte. Dry, cracking and all around awesome.

Big, fat fiberglass snare from Bello Drums. A little sloppy (more tuning than the shell itself), and a little more ring than I’d like to hear from a drum this deep, but really satisfying feel and playability. Again, super fat.

Pretty little guy from Boom Alley. Unfortunately, I don’t remember much about the sound. Great looking lugs and shell though.

The legendary Zelkova snare from Canopus. Lived up to the lore. Huge sound across all dynamics and a very interesting woody character that piped up behind rim shots. 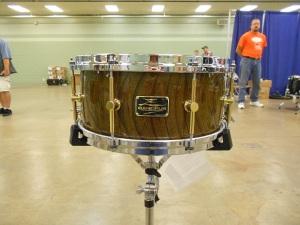 I got to check out these beautiful Artisan snares from Dixon at Summer NAMM, and was happy to see them in the competition. Both had a really dynamic feel with loads of body. Excellent looking drums made by Brady Drums’ Chris Brady.

This is a magnesium shelled snare from Dunnett Classic Drums. This one totally blew me away. I kept going back to it over and over. Big, round body with plenty of attack and a very dark tone. Fell in love.

Nickel Over Brass Collector’s Series from DW Drums. I got a chance to review this snare for DRUM! Magazine and I loved it. Ultra versatile and studio ready. Great unit that should fare well with the judges.

These two drums from Envy had a really polished look, but just didn’t do anything to really stand out sonically. That said, they appeared to be well-crafted, and they sounded really nice, just not on the same level as some of the standouts. 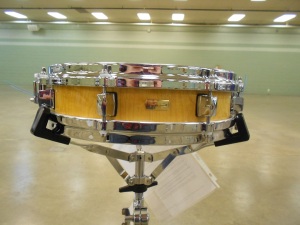 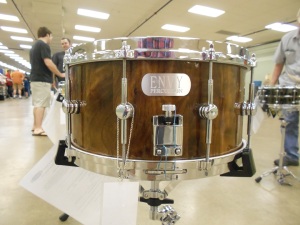 Another brass entry, this time from Gretsch. Excellent tone, super responsive and a killer look. Another winner in the Mr. Versatility category.

Here’s a super clean tub from Infinity Drums. Really crisp and warm. This one may have been a 13″, but I’m not totally sure. I do remember that it sounded very even at all levels though.

I’ve seen John Cross’ beautiful builds before, but I hadn’t heard too much of them. Well, they sound just about as good as they look. I thought the sensitivity was a little lacking at lower dynamic levels, but that could have been the heads or tuning. Otherwise, remarkably clear tones from each of these block and stave builds.

Lang Percussion had three Gladstone snares in the competition. I don’t remember the material of each shell, but all three had a very “wood first” sound. The real standout for me was the hardware on these shells, however. Great looking lugs, the built in drum key and a really remarkable throw off that you can see in the second photo. Plus, that Cadillac green with gold hardware was really special. 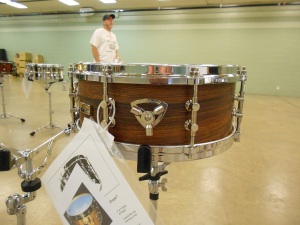 Mapex brought out a snare from each of their new(ish) Black Panther Drum lines. The Retrosonic, pictured first, had a super clear punch with a round finish. Great at all levels, it had lots of character that didn’t overwhelm the initial attack, but supported it in an exciting way. Similarly, the Velvetone had a woody, warm breath across the dynamic spectrum with enough brightness to make it work for a variety of genres. I’m an admitted lover of Mapex snares, and neither of these guys disappointed. Nice snares that each skirt the modern/vintage line in their own way. 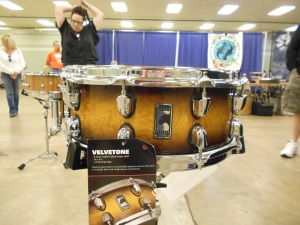 MCD Percussion brought a pair of snares that posted a quietly impressive performance. Each had a relatively subdued look with a soft, but beautiful wood grain finish, and a wide wood-heavy tone that sounded nice all around. I think the snare in the top photo is mahogany, and I’m not sure about the second. Nice surprise from this boutique builder.

I unfortunately don’t remember who built this drum. Could have been Ludwig or Joyful Noise, but I’m just not positive. Either way, it had the beautiful warm center of a brass drum with some added brightness up top that compensated for the extra depth. I’ll figure out who made this one eventually. 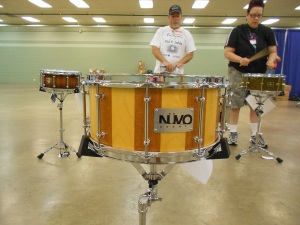 These visually dynamic snares from Austin, TX builder, P. Ellis Drums had great looks and good sound. The 12″ snare pictured first had surprising body for it’s size, and of course plenty of pop. The drums in pictures two and three both had a similar middle of the road character with one being  much brighter (I believe it was the tri-tone). Finally, that “Widowmaker” was an appropriately named beast that was probably one of the loudest drums in the entire building. Beastly. 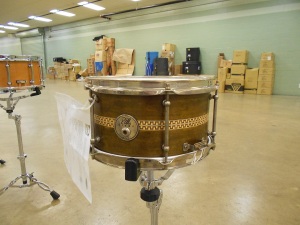 This Pearl Limited Edition snare had a funky pop with a big body to back it up. Felt super versatile and surprisingly sensitive. Great unit from a company that I just don’t pay enough attention to.

This Stone Custom Drums entry was a sneaky favorite. I can’t tell you why I enjoyed it so much, but the drum’s robust tone and extreme clarity really impressed me. Simple and very effective. I guess they build shells primarily (rather than complete drums). Great stuff.

Tama entered two of their recently released S.L.P. snares, and the performance of each reminded me of something that I’ve been thinking about for some time. The quality of these drums is just ridiculous for their price point. These are professional quality snares that don’t cost much more than many mid-level models. The first snare pictured is a bubinga snare that retails for under four hundred dollars. It’s insane. I’m not trying to shill for Tama here, but these drums were really really impressive even without considering cost. The greater point here, however, is that we should all count ourselves lucky to be living in a time when we have access to this kind of luxury for a reasonable price.

The bubinga S.L.P. up first was crisp and dry with a dark finish that was really satisfying. Maybe a little dryer than I would have preferred, but still a really playable drum. The 13″ maple pictured next was a perfect pop/r&b snare with a warm body following a sharp, popping crack.

I almost came home with two the S.L.P. snares (including the bubinga), but had to pass on both (heartbreaking). This is a wildly affordable snare series that definitely warrants some attention.

Tama also shipped over two of their high-end Starphonic snares. The bell brass and brass drums (respectively) were really special. They each had much of the same conventional brass tone, but both were super clean and dynamic. The bell brass set itself apart with a little extra warmth and loads and loads of extra volume. Big dogs going for big bucks, but probably worth the coin. Excellent drums. 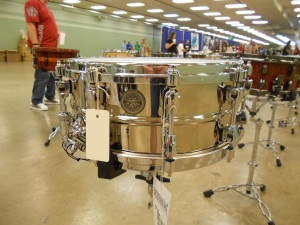 Alright, thanks for checking out all these beautiful snare drums. Let me know which looked best to you in the comment section or on our facebook page. I’ll post the winner when Not So Modern Drummer releases the info. And check back soon for the final round of coverage from the Nashville Drum Show. Lots more to come!