I still haven’t even gotten all the Nashville Drum Show content uploaded, but I made it to PASIC this past weekend and had to share pictures all the beautiful gear I saw. I want to dive right into it, so I’ll just say that PASIC was awesome, Austin ruled (minus the traffic) and there was an insane amount of gorgeous gear at the show.

No photo could do this place justice, but here’s a shot of the hall from one corner. DEEP. 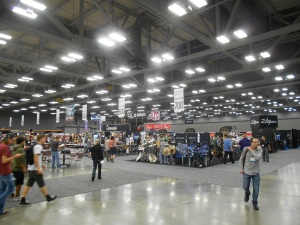 I got to check out a couple of really stunning snare drums from a young company called Acoutin. They specialize in hybrid shells with modular wood edges (the wood component of each drum can be exchanged for a different variety). The modular aspect was really intriguing, but the real star here was the sound. The drums sounded INCREDIBLE. I must have stopped by this booth fifteen times in the two days I was at the show. I only got to photograph a couple, because by the time I came back with a camera, most of the drums had been sold. Can’t wait to see more from this company.

DRUM! Magazine put together this excellent Acoutin video from the show. 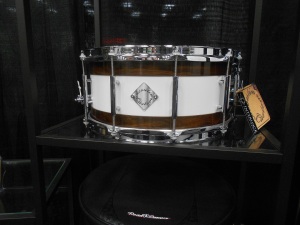 The other company that really stole the show for me was Superdrum. I’ve seen Superdrum adds for a few years now, but hadn’t gotten the opportunity to see or hear them in person. Well, after playing six or seven different Superdrum snares, as well as one of their bass drums, I think they might be on to something.

The main selling point of the Superdrum is the twelve lug tuning system. At first, I thought it sounded a little tedious (changing heads), but having heard these guys in action, it might be worth the extra labor. The 14×8 steel pictured below was a really special drum that had all the meat and body of an 8″ snare, but played with the sensitivity of something much shallower. Great stuff, and it looks like I’ll be doing a full review very shortly. Per Bart Scott: CAN’T WAIT. 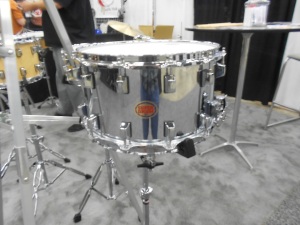 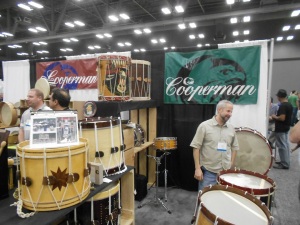 Ddrum had plenty to show off, but this kit caught my eye.

Peep this video of some of their metal snare drum offerings.

Dixon has been turning heads with a growing selection of beautiful high-end snares and kits. 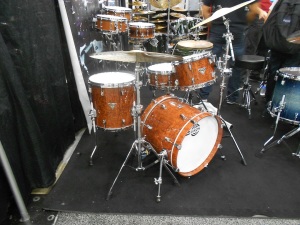 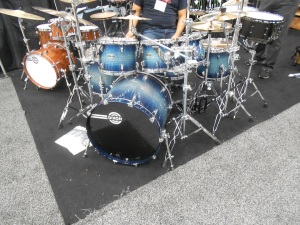 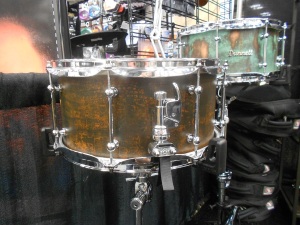 Gretsch was really hammering the vintage reproduction thing, and it ruled. These Retro-Luxe snares looked and sounded excellent, and everything else in the booth was killing as well. I spent a lot of time here. Awesome folks running the booth too.

Check out this clip of Stanton Moore visiting the Gretsch booth. 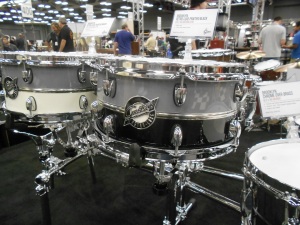 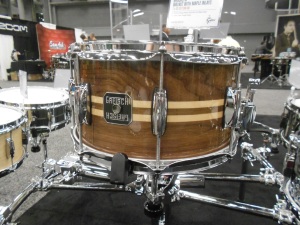 I got to tour Grover Pro Percussion headquarters earlier this summer, and saw a lot of this stuff as it rolled off the assembly line. I was really happy to see their booth get soooo much attention at the show. Those snares are gorgeous. Pictures may not do them justice – just a heads up.

This is a picture of Istanbul Mehmet‘s new Negro series, designed with Horacio ‘el Negro’ Hernandez. Man, were these cymbals beautiful. I had to force myself to walk away. The ride on the far right was something else. Really, really nice. 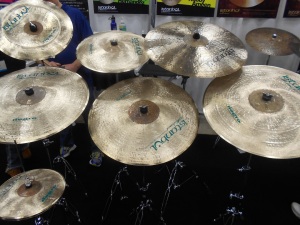 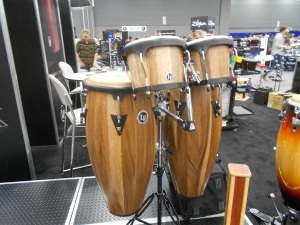 Mapex had their usually display of drool-inducing snares and a monster MyDentity kit. Excellent as always. 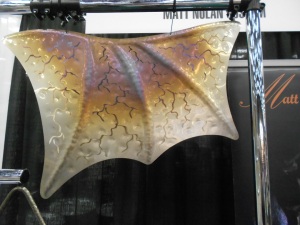 Pearl had a huge selection of their Philharmonic snares. True precision instruments. 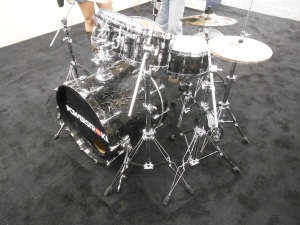 This was like one eighth of Sabian‘s booth. Looots to look at.

Tama had their beautiful Starclassic Birch/Bubinga kit front and center with a bunch of S.L.P., Starphonic and prototype snares for support. They had a solid shelled prototype that totally blew me away. Doing it right! 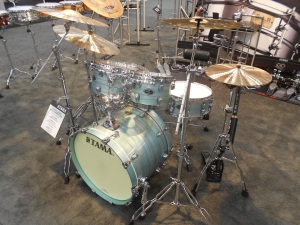 Plenty of pretty perc from Toca

Vic Firth had a giant booth showcasing most of their catalog. Here’s a look at their Signature Series line.

Yamaha had lots and lots of fantastic drums. The first set is a Club Custom with wood hoops which was used by Steve Gadd during Friday night’s performance. I’ll take it. 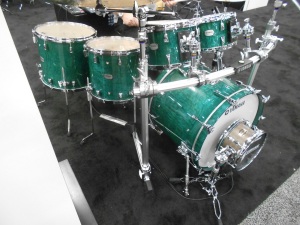 Finally, Zildjian had one of the largest booths at the show, but this selection of prototypes kept me busy longer than anything else. Very, very hard to turn away from some of these pies.

One thought on “A Couple Shots from PASIC”